How thermal bridging affects the building?

In a roof or wall construction, where some areas have low thermal conductivity materials such as insulation and other areas have high thermal conductivity materials such as stud framing, thermal bridging occurs. This means heat can easily flow through the high thermal conductivity section (i.e. with the lowest thermal resistance) to/from the outdoors. Thermal bridging results in an overall reduction in the thermal resistance of the building fabric. This phenomenon greatly contributes to the energy efficiency of the building, especially where thick insulation is installed or metal elements are used for construction. Thermal bridging increases heating and cooling demand, makes the building vulnerable to condensation and leaves occupants with less thermal comfort. Find out more… 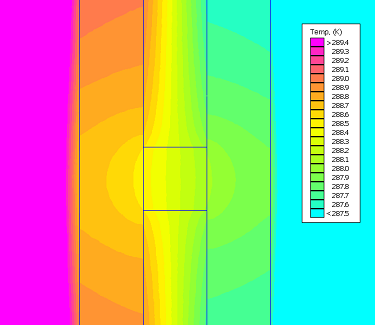 When is thermal bridging significant? 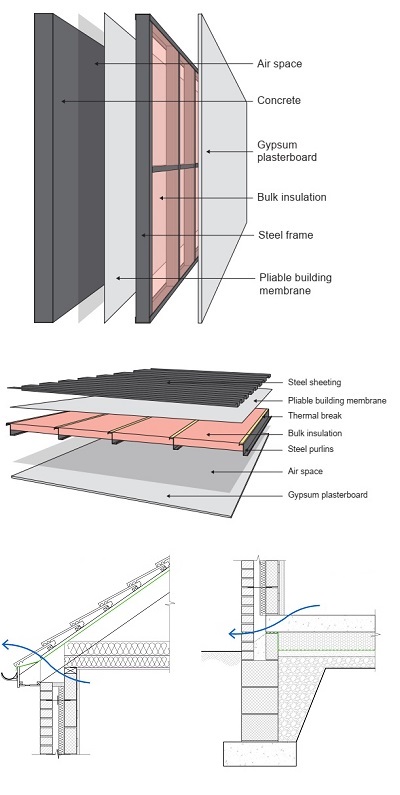 How to calculate thermal bridging?

There are four steps for the calculation of the negative effect of thermal bridging:

2- Determine the portion of each parallel material

You must determine what portion of the wall consists of the high conductivity material such as metal frames. For example, a 3m2 wall has insulation with an area of 2.7m2 that is bridged by metal stud frames, the portion of insulation is 2.7/3=90% and we also have a 10% metal stud area.

3- Determine the R-value of each parallel material

To calculate the thermal resistance (R-value) of a material, divide its thickness by its thermal conductivity. For example, a 90mm thick timber batten has 0.09/0.1=0.9 m2K/W thermal resistance. Keep in mind the addition of air space resistance if available above each parallel layer.

4- Calculate the net R-value of the bridged layer

The net R-value of the bridged layer can then be calculated as below:

How to mitigate thermal bridging?

there are four major contributing factors to the mitigation of the negative thermal bridging effect. These factors are briefly discussed below:

The selection of framing material for wall or roof construction depends on many factors like bearing load or fire hazard. The use of timber stud walls is better than metal stud frames as the thermal conductivity of steel is 400 times more than timber (47.4 to 0.1 W/m2K). Concrete walls could be ideal to significantly reduce the thermal bridging effect where a continuous and rigid insulation panel (e.g. insulated plasterboards) is used. This is also favourable for a suspended concrete floor as well as concrete walls or roofs. Complete mitigation of the thermal bridging effect can be obtained using fully continuous structural systems like Structural Insulated Panels (SIPs).

Thermal bridging depends on the width, depth and span of the framing elements. The smaller the width of the element, the more insulation could sit between the two framing elements. Increasing the depth of framing increases its thermal resistance while allowing to have thicker insulations. Perhaps the most important factor of all is the framing span. The more the framing span, the lesser the thermal bridging effect. Increasing the framing span simply means more room for insulation and less area occupied by framing materials. Thickness is also important for metal construction. The lesser the thickness, the narrower the pathway for the heat to flow.

If there is no insulation installed between the wall or roof frames, then no thermal bridging occurs (with an exception of external wall/roof cladding and internal wall lining directly attached to metal frames). With a modest amount of insulation in timber wall/roof construction (less than R2.0), the negative effect of thermal bridging is arguably small. The negative effect increases with the thickness of the insulation and the thicker the insulation gets, the more the thermal bridging effect increases exponentially. Hence, you get to a spot where even getting from R6.0 to R8.0 (unrealistic) won’t add but a couple of decimal numbers to the roof Total R-value.

A thermal break is a piece of material with a low thermal conductance that is attached to the end of each framing material. Thermal break acts as a heat block to reduce the heat flow through the high conducting framing elements. Thermal break material consists of wood, EPS, Rockwool, rigid PIR and many more. The addition of thermal break also adds an air gap above the insulation with an added resistance. Thermal breaks are the most effective way for the mitigation of thermal bridging and are widely used across the commercial section. There are mandatory regulations for energy efficiency or the buildings in Australia and are described below.

If there are several construction options, its better to have an energy consultant navigate through options for a more energy efficient design.

What are the mandatory provisions for the treatment of thermal bridging?

The residential section and its mandatory provisions for thermal breaks are described in:

As the proposed solution is the same in both volumes, we only cite the provisions for roof thermal breaks according to NCC Vol 1.0:

must have a thermal break, consisting of a material with an R-Value of not less than R0.2, installed at all points of contact
between the metal sheet roofing and its supporting metal purlins, metal rafters or metal battens.

Gathered from the above and other mentioned references, mandatory provisions for residential buildings are quite straightforward: if you have a metal construction, thermal breaks with an R-value of not less than R0.2 must be installed at the end of metal framing elements.

Navigating through J1.1 to J1.6, you won’t find any mandatory provisions for thermal breaks in Commercial buildings. The reason behind it is that NCC requires you to calculate the negative effect of thermal bridging while aiming to achieve the required Total R-values for roofs, walls and floor construction.

Total System U-Value (W/m².K), for the purposes of Volume One, means the thermal transmittance of the composite element allowing for the effect of any airspaces, thermal bridging and associated surface resistances.

For a commercial building, while conducting an energy report, You may or may not allow for thermal breaks in the timber or metal construction, but nevertheless, Total R-values must always be met. Also, note that the inclusion of thermal breaks for metal construction is inevitable in many cases to reach the required R-values. As an example, a Class 3 building (e.g. hotel) in Climate Zone 6 (e.g. Melbourne) is required to have walls with a minimum Total R-value of R2.8. In the case of metal framing walls, you can never achieve R2.8 without the use of thermal breaks as the negative thermal bridging effect would be so high.

Effect of thermal break on a wall with metal stud framing

The effect of thermal bridging in a precast concrete wall is investigated here. Metal framing studs are attached to concrete and 90mm thick insulation completely fills the space between two consecutive vertical frames. Stud frame depth, width and thickness are 92×33.5×0.75mm respectively with a span of 600mm c/c.

The results of each case is hereby presented: 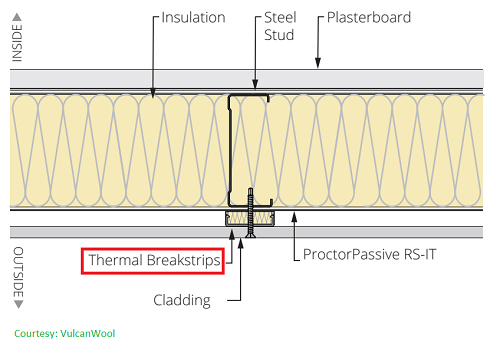 Reduction in Total R-value compared to the ideal case:  0%

Reduction in Total R-value compared to the ideal case:  -57%

Reduction in Total R-value compared to the ideal case:  -22%

Reduction in Total R-value compared to the ideal case:  -14%